This will be achieved through...

The Vision of First Congregational St. Clair is to be vibrant family that embodies Christ's message of faith, hope, and love. 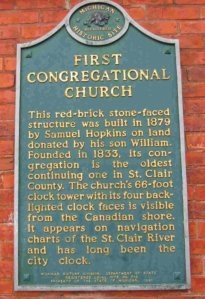 We are often identified as "the church with the clock tower". The tower is 66 feet high and has a clock face on each of the four sides. It can be seen from Canada, and in the days before electronic navigation, the captain and crew of cargo ships used our clock tower as a navigational aid as they sailed up and down the St. Clair River. The tower is still marked on the St. Clair River navigational charts. To this day, the time they pass abeam of the tower is still recorded in ship's logs. First Congregational Church UCC consists of the church building with a connecting education building and a separate parsonage. We occupy an entire tree-shaded city block in downtown St. Clair, about 2 blocks from the St. Clair River.

On September 9, 1879 the cornerstone was laid for the present church on land given by the Hopkins family for the church and parsonage. The red-brick building was completed in 1880. The pews were arranged in amphitheater form, and seated 360. According to church council minutes, in 1883, the church property was valued at $15,000 and there were 115 members.

In 1956 we dedicated a new Religious Education wing.

The Mary Moore Memorial window was installed in 1962; its theme is Reconciliation.

We observed the 100th Anniversary of the building in 1979 and were designated as a State of Michigan Historical Building. The plaque is mounted on the east side of the building.

In 1984 we held a Sesqui-Centennial Year Celebration.

In 2008 we celebrated our 175th birthday with special events and wonderful displays about our history. 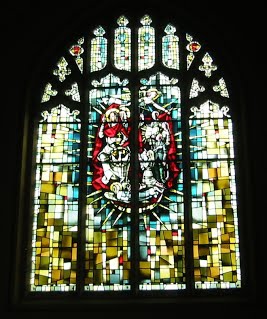